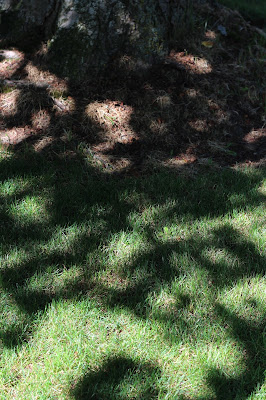 Remember a while ago (probably not!) I mentioned that my alarm is the radio and that sometimes the radio goes all fuzzy?

Well, this morning, it fuzzed out for two segments of snooze... which, if we figure a snooze segment is 9 minutes, that means that my radio on the alarm clock had fuzzy reception for maybe 20 minutes!

I keep figuring it must be someone else in the building standing somewhere, although I suppose I could pay attention to the weather, maybe it's partially that but that would explain it less, I think, thank a human moving around type thing.

Speaking of weather... Fall seems to have decided to be here, as of this weekend.

We had rain.  As in, rain so heavy it woke me up, twice, on Saturday (I think) night.  (As well as being "rain so heavy" I wondered why there was no rainfall warning.)  Lots of standing water on the roads and at least one friend's husband got drenched (like, completely!) by a bus while on a run.  But it was also the chill.  It just felt... cold this weekend.

Even just five degrees or so makes a huge difference at this point, and I did debate turning my radiator on...

I put one of my fans away, and figured that would cause a heat wave, but... apparently not, so the second fan is not away, but is moved close to being put away and maybe we'll see if that brings up an atmospheric change.

I mean, the time I took my umbrella with me on a stroll to the library, it didn't rain and the sun came out so clearly I'm magic that way.

But no, it really did feel genuinely fall-like this weekend.  Perhaps we're not getting the late summer we are used to around here.  (Note, I'm not mentioning the shortening days, which is totally also noticeable... sigh... although apparently ninety something percent of people surveyed said they didn't want the time change anymore so maybe there's hope?)

Brr.  Radiator not on... yet, but hot water bottles have been used.  Just saying!
Posted by Victoria at Monday, September 16, 2019

I really hope that having a 93% "stop changing the time" response actually leads to action. I mean, when has that many people agreed on anything in this province?