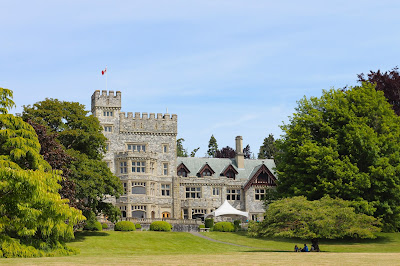 Have you ever gone through a planned power outage?  You know, one that wasn't a surprise?

Maybe they're more common than I think, but I went through one a while ago and it was kind of a unique experience.  At least for me.

Our power company (BC Hydro) let us know a bit in advance (I've genuinely forgotten how far in advance to be honest, my bad!) and I think they did a really good job of trying to make sure we were informed.  I got a card/note in the mail.  I also got an email and a phone call (all spaced out, as in not all at the same time, some closer to the actual date).  And I assume they sent a notice to our building itself as the manager put up some signage the night before the actual event.

It was kind of unsettling, to be honest, because usually with a power outage (and I haven't had many since I moved here, I must be on a pretty solid grid...) it's a bit of a surprise and you just kind of adjust.  But with this?  I had time to think about it.  And I decided to ask Jason if he'd be ok with me spending the day at his place (seeing as he's my bubble person anyway).  He said that was fine but I still felt like I was imposing (thanks brain!) because the power was planned to be off pretty much for an entire day... like 9-5 sort of thing.  With the warning of course that it might not happen if something else came up.

And I didn't want to accidentally open my fridge and ruin my food.  And my bathroom doesn't have a window so it would have meant either darkness in there all day or candles.  And just all in all it felt easier and smarter and more comfortable to be elsewhere and with it being Covid... I had my one option and thankfully it was a go.

I've just remembered now, it would have meant no internet at my place too.  Which, I mean of course I can survive without it but it sure makes a down day go faster, you know?

I didn't think too hard about how much of my neighbourhood was going to be dealing with the same thing but that evening as I was checking to see if the power was back on I had my "oh... right" moment of it was a good few of us dealing with this, not just my building... go figure.

And they'd warned us to unplug things, so I did what I could.  I mean I couldn't get to my fridge/stove as they suggested, so I made sure my electronics were unplugged and stuff like that.  I guess there's a possible surge with this kind of thing that's maybe different from a power outage?  Or like I don't know... electricity is still a bit of a scary mystery to me, maybe I should unplug things next time there's a non-planned outage too?  Dunno man.

But yeah, that was a first for me and a unique situation... the knowing it was going to happen versus the random outage.

So my fridge stayed closed and my electronics are fine and I assume they fixed or upgraded whatever they needed to and yay for electricity, am I right?

When they did that at my place, I napped and then sat outside and read a book.

Well, all my important electronics are protected against surges, so that helped. I figured the stove and fridge have survived power outages before, so they'd be okay.
And I had put a 2L of water in my freezer a few days ahead to help keep everything in there cool. And being a bachelor, it's not like I worried much about the 4 condiments in my fridge.
... hmm, in hindsight, maybe I'd done a bit of worrying in advance about it.

Oh interesting. I didn't think about the frozen thing in freezer, good call!